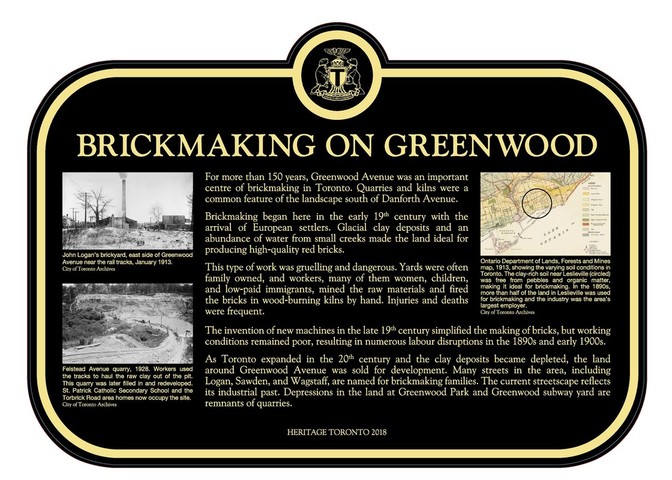 For more than a 150 years, Greenwood Avenue was an important centre of brickmaking in Toronto. Quarries and kilns were a common feature of the landscape south of Danforth Avenue. Brick making began here in the early 19th century with the arrival of European settlers. Glacial clay deposits and an abundance of water from small creeks made the land ideal for producing high-quality red bricks.

This type of work was gruelling and dangerous. Yards were often family owned, and workers, many of them women, children, and low-paid immigrants, mined the raw materials and fired the bricks in wood-burning kilns by hand. Injuries and deaths were frequent.

The invention of new machines in the late 19th century simplified the making of bricks, but workingconditions remained poor, resulting in numerous labour disruptions in the 1890s and early 1900s.

As Toronto expanded in the 20th century and the clay deposits became depleted, the land around Greenwood Avenue was sold for development. Many streets in the area, including Logan, Sawden, and Wagstaff, are named for brickmaking families. The current streetscape reflects its industrial past. Depressions in the land at Greenwood Park and Greenwood subway yard are remnants of quarries.