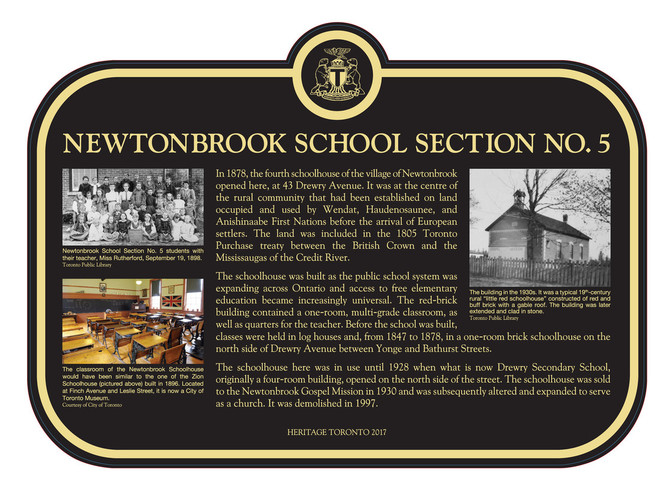 In 1878, the fourth schoolhouse of the village of Newtonbrook opened here, at 43 Drewry Avenue. It was at the centre of the rural community that had been established on land occupied and used by Wendat, Haudenosaunee, and Anishinaabe First Nations before the arrival of European settlers. The land was included in the 1805 Toronto Purchase treaty between the British Crown and the Mississaugas of the Credit River. The schoolhouse was built as the public school system was expanding across Ontario and access to free elementary education became increasingly universal. The red–brick building contained a one–room, multi–grade classroom, as well as quarters for the teacher. Before the school was built, classes were held in log houses and, from 1847 to 1878, in a one–room brick schoolhouse on the north side of Drewry Avenue between Yonge and Bathurst Streets. The schoolhouse here was in use until 1928 when Drewry Public School, originally a four–room building, opened on the north side of the street. The schoolhouse was sold to the Newtonbrook Gospel Mission in 1930 and was subsequently altered and expanded to serve as a church. It was demolished in 1997.