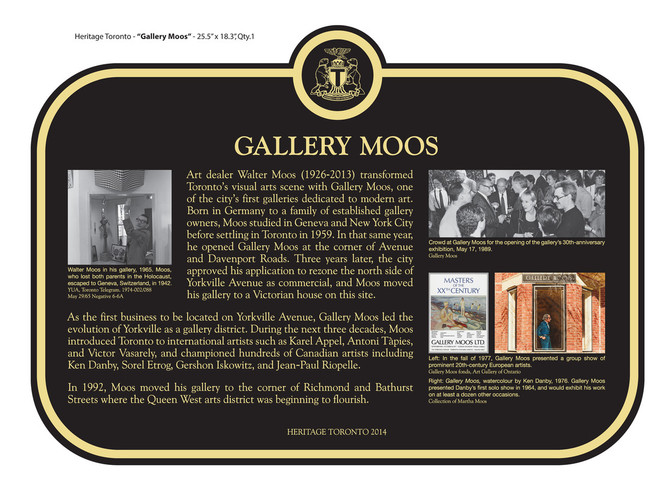 Art dealer Walter Moos (1926-2013) transformed Toronto's visual arts scene with Gallery Moos, one of the city's first galleries dedicated to modern art. Born in Germany to a family of established gallery owners, Moos studied in Geneva and New York City before settling in Toronto in 1959. In that same year, he opened Gallery Moos at the corner of Avenue and Davenport Roads. Three years later, the city approved his application to rezone the north side of Yorkville Avenue as commercial, and Moos moved his gallery to a Victorian house on this site. As the first business to be located on Yorkville Avenue, Gallery Moos led the evolution of Yorkville as a gallery district. During the next three decades, Moos introduced Toronto to international artists such as Karel Appel, Antoni Tapies, and Victor Vasarely, and championed hundreds of Canadian artists including Ken Danby, Sorel Etrog, Gershon Iskowitz, and Jean-Paul Riopelle. In 1992, Moos moved his gallery to the corner of Richmond and Bathurst Streets where the Queen West arts district was beginning to flourish. Heritage TORONTO 2014