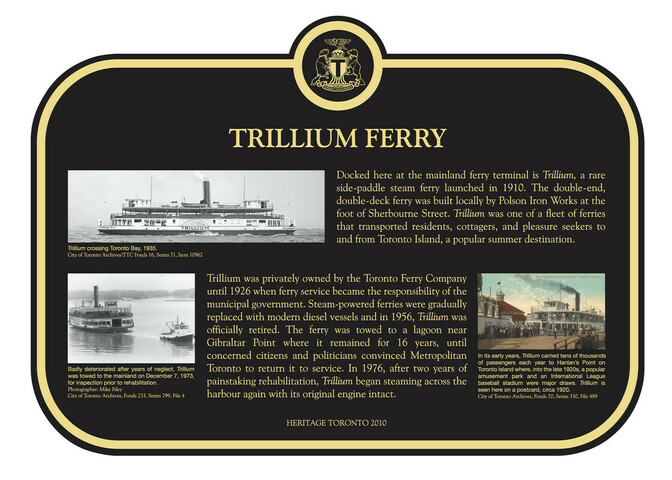 Docked here at the mainland ferry terminal is Trillium, a rare side-paddle steam ferry launched in 1910. The double-end, double-deck ferry was built locally by Polson Iron Works at the foot of Sherbourne Street. Trillium was one of a fleet of ferries that transported residents, cottagers, and pleasure seekers to and from Toronto Island, a popular summer destination.

Trillium was privately owned by the Toronto Ferry Company until 1926, when ferry service became the responsibility of the municipal government. Steam-powered ferries were gradually replaced with modern diesel boats and in 1956, Trillium was officially retired. The ferry was towed to a lagoon near Gibraltar Point where it remained for 16 years, until concerned citizens and politicians convinced Metropolitan Toronto to return it to service. In 1976, after two years of painstaking rehabilitation, Trillium began steaming across the harbour again with its original engine intact.