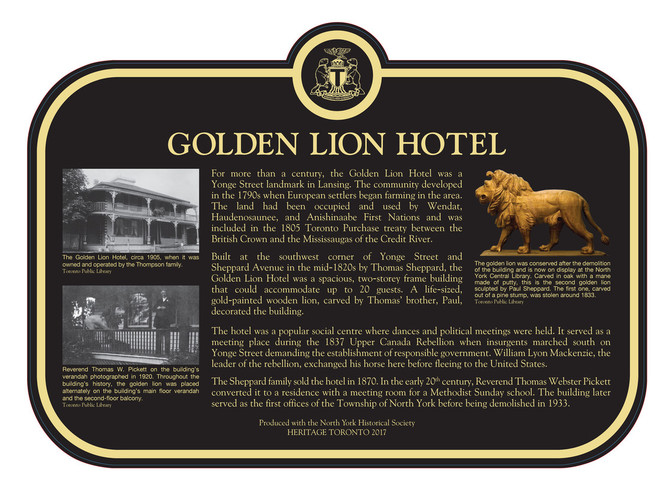 For more than a century, the Golden Lion Hotel was a Yonge Street landmark in Lansing. The community developed in the 1790s when European settlers began farming in the area. The land had been occupied and used by Wendat, Haudenosaunee, and Anishinaabe First Nations and was included in the 1805 Toronto Purchase treaty between the British Crown and the Mississaugas of the Credit River. Built at the southwest corner of Yonge Street and Sheppard Avenue in the mid-1820s by Thomas Sheppard, the Golden Lion Hotel was a spacious, two-storey frame building that could accommodate up to 20 guests. A life-sized, gold-painted wooden lion, carved by Thomas’ brother, Paul,
decorated the building. The hotel was a popular social centre where dances and political meetings were held. It served as a meeting place during the 1837 Upper Canada Rebellion when insurgents marched south on Yonge Street demanding the establishment of responsible government. William Lyon Mackenzie, the leader of the rebellion, exchanged his horse here before fleeing to the United States. The Sheppard family sold the hotel in 1870. In the early 20th century, Reverend Thomas Webster Pickett converted it to a residence with a meeting room for a Methodist Sunday school. The building later served as the first offices of the Township of North York before being demolished in 1933.