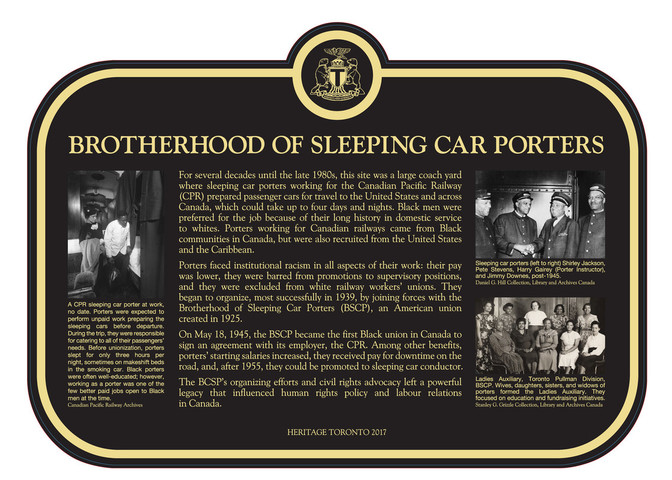 Beginning in the 1880s, this site was, for almost 100 years, a large coach yard where sleeping car porters working for the Canadian Pacific Railway (CPR) prepared passenger cars for travel across Canada that could take up to four days and three nights. Black men were preferred for the job because of their long history in domestic service to whites. Porters working for Canadian railways came from Black communities in Canada, but were also recruited from the United States and the Caribbean.

Porters faced institutional racism in all aspects of their work: their pay was lower, they were barred from promotions to supervisory positions, and they were excluded from white railway workers’ unions. They began to organize, most successfully in 1939, by joining forces with the Brotherhood of Sleeping Car Porters (BSCP), an American union created in 1925.

On May 18, 1945, the BSCP became the first Black union in Canada to sign an agreement with its white employer, the CPR. Among other benefits, porters’ starting salaries increased, they received pay for downtime on the road, and, after 1955, they could be promoted to Sleeping Car Conductor.

Comments
Related resources
View these resources as a result set
Learning...
The Brotherh...