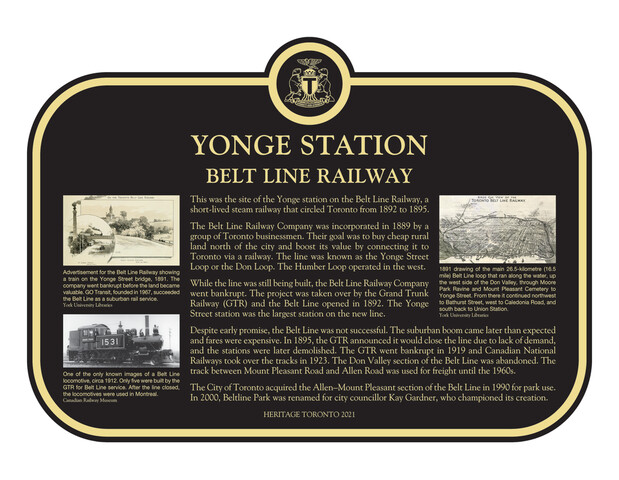 This was the site of the Yonge station on the Belt Line Railway, a short-lived steam railway that circled Toronto from 1892 to 1895.

The Belt Line Railway Company was incorporated in 1889 by a group of Toronto businessmen. Their goal was to buy cheap rural land north of the city and boost its value by connecting it to Toronto via a railway. The line was known as the Yonge Street Loop or the Don Loop. The Humber Loop operated in the west.

While the line was still being built, the Belt Line Railway Company went bankrupt. The project was taken over by the Grand Trunk Railway (GTR) and the Belt Line opened in 1892. The Yonge Street station was the largest station on the new line.

Despite early promise, the Belt Line was not successful. The suburban boom came later than expected and fares were expensive. In 1895, the GTR announced it would close the line due to lack of demand, and the stations were later demolished. The GTR went bankrupt in 1919 and Canadian National Railways took over the tracks in 1923. The Don Valley section of the Belt Line was abandoned. The track between Mount Pleasant Road and Allen Road was used for freight until the 1960s.

The City of Toronto acquired the Allen–Mount Pleasant section of the Belt Line in 1990 for park use. In 2000, Beltline Park was renamed for city councillor Kay Gardner, who championed its creation.