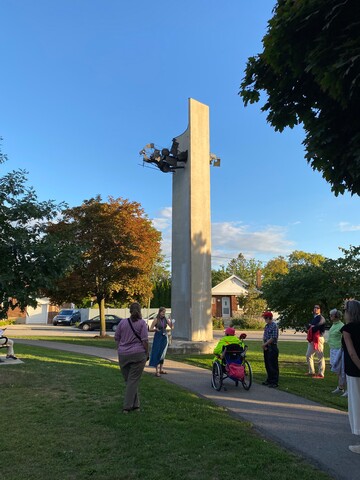 Located outside the S. Walter Stewart Library in East York, “The Pylon” was designed by Gerald Gladstone, a Toronto sculptor known for his avant-garde work. “The Pylon” is made of two 35-foot tall concrete columns. When it was first installed in the early 1960s, the sculpture also featured a reflecting pond with lights (now filled with concrete) and bronze shapes protruding out of the concrete pillars. The sculpture was intended to convey the relationship between “man and some unexplored galaxy,” according to Gladstone, but it attracted controversy when it was first installed. Many residents called it a “monstrosity” and a “mess of tin cans and bed springs”. Jack Allen, the reeve of East York of the time, defended the pylon stating that “it’s out-of-this-world and exactly what was wanted."