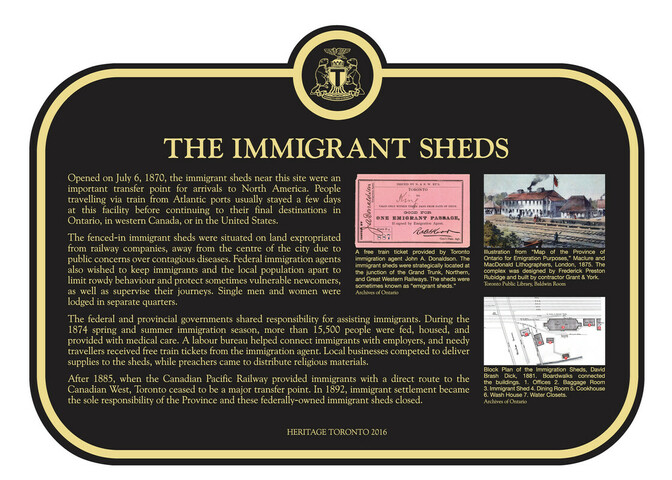 Opened on July 6, 1870, the immigrant sheds near this site were an important transfer point for arrivals to North America. People travelling via train from Atlantic ports usually stayed a few days at this facility before continuing to their final destinations in Ontario, in western Canada, or in the United States. The fenced-in immigrant sheds were situated on land expropriated from railway companies, away from the centre of the city due to public concerns over contagious diseases. Federal immigration agents also wished to keep immigrants and the local population apart to limit rowdy behaviour and protect sometimes vulnerable newcomers, as well as supervise their journeys. Single men and women were lodged in separate quarters. The federal and provincial governments shared responsibility for assisting immigrants. During the 1874 spring and summer immigration season, more than 15, 500 people were fed, housed, and provided with medical care. A labour bureau helped connect immigrants with employers, and needy travellers received free train tickets from the immigration agent. Local businesses competed to deliver supplies to the sheds, while preachers came to distribute religious materials. After 1885, when the Canadian Pacific Railway provided immigrants with a direct route to the Canadian West, Toronto ceased to be a major transfer point. In 1892, immigrant settlement became the sole responsibility of the Province and these federally-owned immigrant sheds closed. Heritage TORONTO 2016