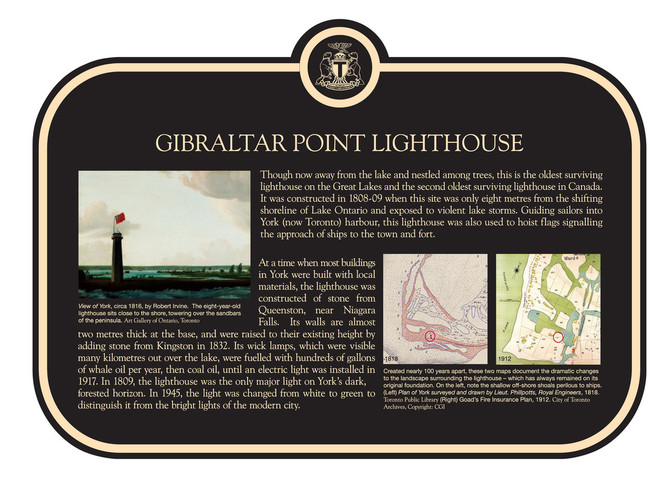 Though now away from the lake and nestled among trees this is the oldest surviving lighthouse on the Great Lakes and the second oldest surviving lighthouse in Canada. It was constructed in 1808-09 when this site was only eight metres from the shifting shoreline of Lake Ontario and exposed to violent lake storms. Guiding sailors into York (now Toronto) harbour this lighthouse was also used to hoist flags signalling the approach of ships to the town and fort.

At a time when most buildings in York were built with local materials the lighthouse was constructed of stone from Queenston near Niagara Falls. Its walls are almost two metres thick at the base and were raised to their existing height by adding stone from Kingston in 1832. Its wick lamps which were visible many kilometres out over the lake were fuelled with hundreds of gallons of whale oil per year then coal oil until an electric light was installed in 1917. In 1809 the lighthouse was the only major light on York's dark forested horizon. In 1945 the light was changed from white to green to distinguish it from the bright lights of the modern city.