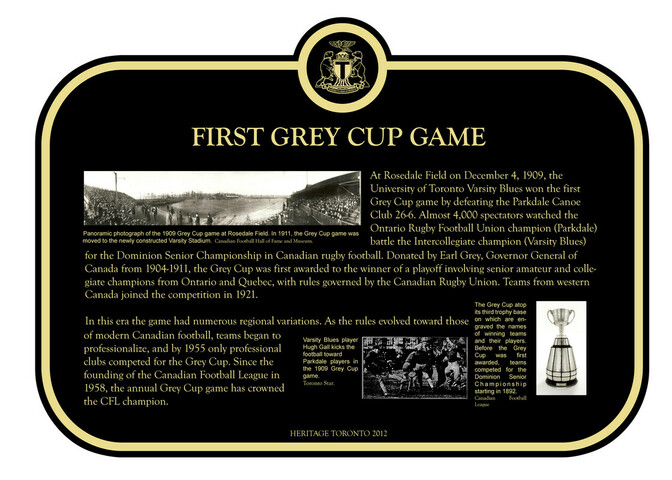 At Rosedale Field on December 4, 1909, the University of Toronto Varsity Blues won the first Grey Cup game by defeating the Parkdale Canoe Club 26-6. Almost 4, 000 spectators watched the Ontario Rugby Football Union champion (Parkdale)
battle the Intercollegiate champion (Varsity Blues) for the Dominion Senior Championship in Canadian rugby football. Donated by Earl Grey, Governor General of Canada from 1904-1911, the Grey Cup was first awarded to the winner of a playoff involving senior amateur and collegiate champions from Ontario and Quebec, with rules governed by the Canadian Rugby Union. Teams from western Canada joined the competition in 1921.

In this era the game had numerous regional variations. As the rules evolved those
of modern Canadian football, teams began to professionalize, and by 1955 only professional clubs competed for the Grey Cup. Since the founding of the Canadian Football League in 1958, the annual Grey Cup game has crowned the CFL champion.