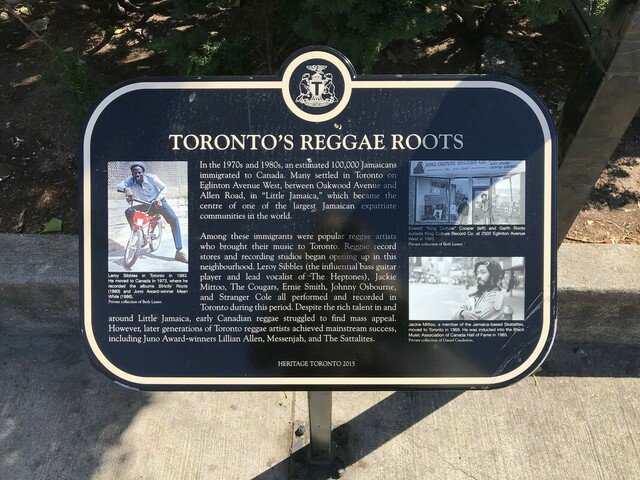 In the 1970s and 1980s, Eglinton Avenue West between Oakwood Avenue and Allen Road became known as Toronto's "Little Jamaica, " the centre of one of the largest Jamaican expatriate communities in the world. Motivated by the unstable political climate and threat of gang violence in Kingston, Jamaica, about 100, 000 Jamaicans immigrated to Canada during this period.

Among them were several popular musicians, who began performing in Toronto. Reggae record stores and recording studios emerged alongside the music scene. Leroy Sibbles, the influential bass guitar player and lead vocalist of the Heptones, Jackie Mittoo, Ernie Smith, Johnny Osbourne, and Stranger Cole all recorded and performed music in Toronto during this period. Despite the rich talent in and around Little Jamaica, early Canadian-made reggae struggled to find mass appeal. However, later generations of Toronto reggae artists achieved mainstream success, including Juno Award winners Lillian Allen, the Sattalites, and Messenjah.