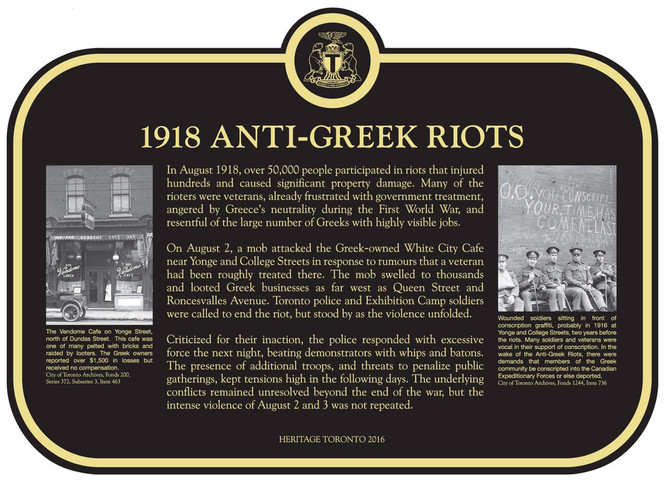 In August 1918, over 50, 000 people participated in riots that injured hundreds and caused significant property damage. Many of the rioters were veterans, already frustrated with government treatment, angered by Greece’s neutrality during the First World War, and resentful of the large number of Greeks with highly visible jobs.

On August 2, a mob attacked the Greek-owned White City Cafe near Yonge and College Streets in response to rumours that a veteran had been roughly treated there. The mob swelled to thousands and looted Greek businesses as far west as Queen Street and Roncesvalles Avenue. Toronto police and Exhibition Camp soldiers were called to end the riot, but stood by as the violence unfolded.

Criticized for their inaction, the police responded with excessive force the next night, beating demonstrators with whips and batons. The presence of additional troops, and threats to penalize public gatherings, kept tensions high in the following days. The underlying conflicts remained unresolved beyond the end of the war, but the intense violence of August 2 and 3 was not repeated.

Immigration and Multiculturalism, War and Conflict