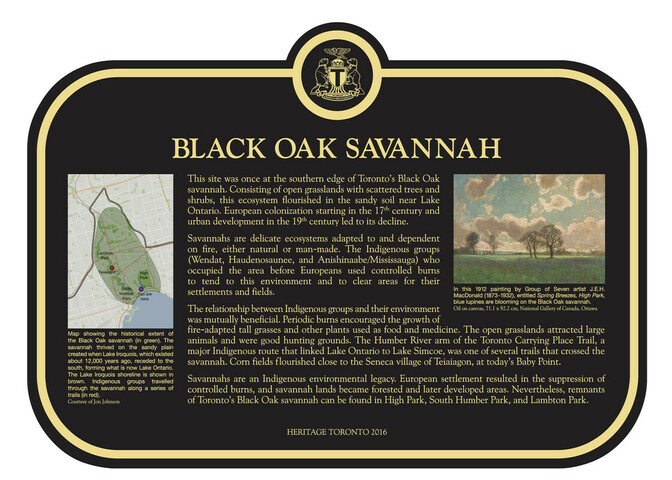 This site was once at the southern edge of Toronto's Black Oak savannah. Consisting of open grasslands with scattered trees and shrubs, this ecosystem flourished in the sandy soil near Lake Ontario. European colonization starting in the 18th century and urban development in the 19th century led to its decline.

Savannahs are delicate ecosystems adapted to and dependent on fire, either natural or man-made. The Indigenous groups (Wendat, Haudenosaunee, and Anishinaabe/Mississauga) who occupied the area before Europeans used controlled burns to tend to this environment and to clear areas for their settlements and fields.

The relationship between Indigenous groups and their environment was mutually beneficial. Periodic burns encouraged the growth of fire-adapted tall grasses and other plants used as food and medicine. The open grasslands attracted large animals and were good hunting grounds. The Humber River arm of the Toronto Carrying Place Trail, a major Indigenous route that linked Lake Ontario to Lake Simcoe, was one of several trails that crossed the savannah. Corn fields flourished close to the Seneca village of Teiaiagon, at today's Baby Point.