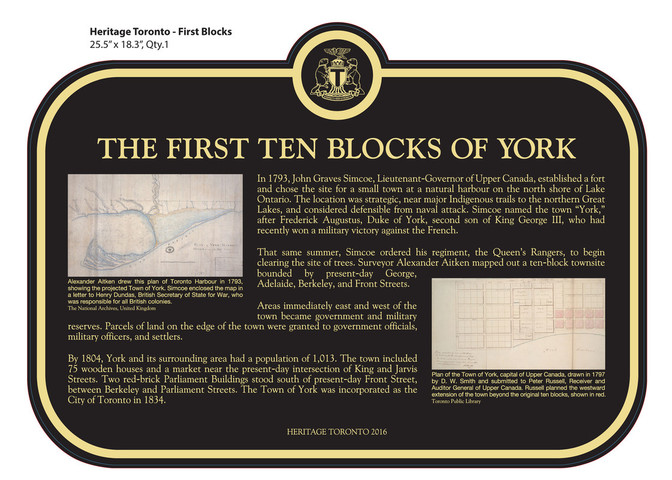 In 1793, John Graves Simcoe, Lieutenant-Governor of Upper Canada, established a fort and chose the site for a small town at a natural harbour on the north shore of Lake Ontario. The location was strategic, near major Indigenous trails to the northern Great Lakes, and considered defensible from naval attack. Simcoe named the town “York, ” after Frederick Augustus, Duke of York, second son of King George III, who had recently won a military victory against the French.

That same summer, Simcoe ordered his regiment, the Queen's Rangers, to begin clearing the site of trees. Surveyor Alexander Aitken mapped out a ten-block townsite bounded by present-day George, Alexander Aitken drew this plan of Toronto Harbour in Adelaide, Berkeley, and Front Streets.

Areas immediately east and west of the town became government and military reserves. Parcels of land on the edge of the town were granted to government officials, military officers, and settlers.

By 1804, York and its surrounding area had a population of 1, 013. The town included 75 wooden houses and a market near the present-day intersection of King and Jarvis Streets. Two red-brick Parliament Buildings stood south of present-day Front Street, between Berkeley and Parliament Streets. The Towns and Villages was incorporated as the City of Toronto in 1834.