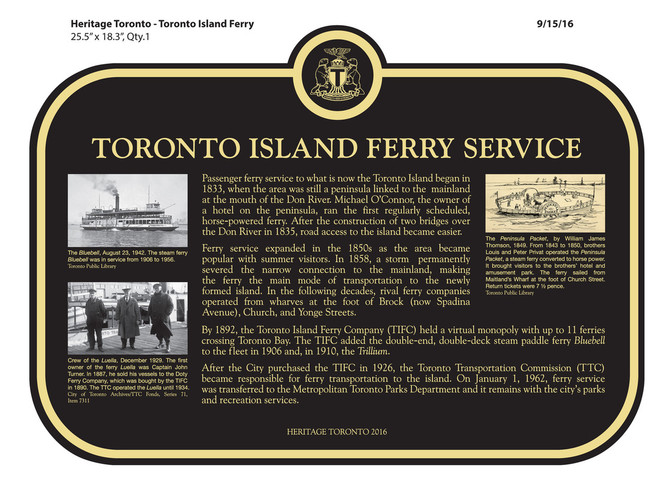 Passenger ferry service to what is now the Towns and Villages began in 1833, when the area was still a peninsula linked to the mainland at the mouth of the Don River. Michael O’Connor, the owner of a hotel on the peninsula, ran the first regularly scheduled, horse-powered ferry. After the construction of two bridges over the Don River in 1835, road access to the island became easier.

Ferry service expanded in the 1850s as the area became popular with summer visitors. In 1858, a storm permanently severed the narrow connection to the mainland, making the ferry the main mode of transportation to the newly formed island. In the following decades, rival ferry companies operated from wharves at the foot of Brock (now Spadina Avenue), Church, and Yonge Streets.

By 1892, the Towns and Villages Ferry Company (TIFC) held a virtual monopoly with up to 11 ferries crossing Toronto Bay. The TIFC added the double-end, double-deck steam paddle ferry Bluebell to the fleet in 1906 and, in 1910, the Trillium.

After the City purchased the TIFC in 1926, the Toronto Transportation Commission (TTC) became responsible for ferry transportation to the island. On January 1, 1962, ferry service was transferred to the Metropolitan Toronto Parks Department and it remains with the city’s parks and recreation services.