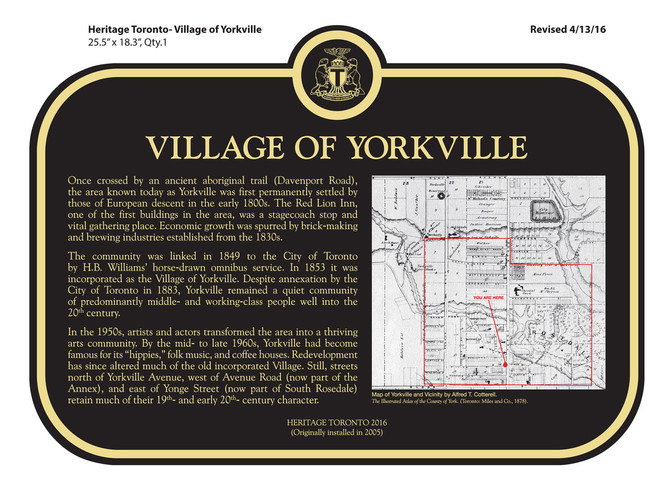 Once crossed by an ancient aboriginal trail (Davenport Road), the area known today as Yorkville was first permanently settled by those of European descent in the early 1800s. The Red Lion Inn, one of the first buildings in the area, was a stagecoach stop and vital gathering place. Economic growth was spurred by brick-making and brewing industries established from the 1830s.

The community was linked in 1849 to the City of Toronto by H.B. Williams' horse-drawn omnibus service. In 1853 it was incorporated as the Village of Yorkville. Despite annexation by the City of Toronto in 1883, Yorkville remained a quiet community of predominantly middle- and working-class people well into the 20th century.

In the 1950s, artists and actors transformed the area into a thriving arts community. By the mid- to late 1960s, Yorkville had become famous for its "hippies, " folk music, and coffee houses. Redevelopment has since altered much of the old incorporated Village. Still, streets north of Yorkville Avenue¸ west of Avenue Road (now part of the Annex), and east of Yonge Street (now part of South Rosedale) retain much of their 19th- and early 20th- century character.