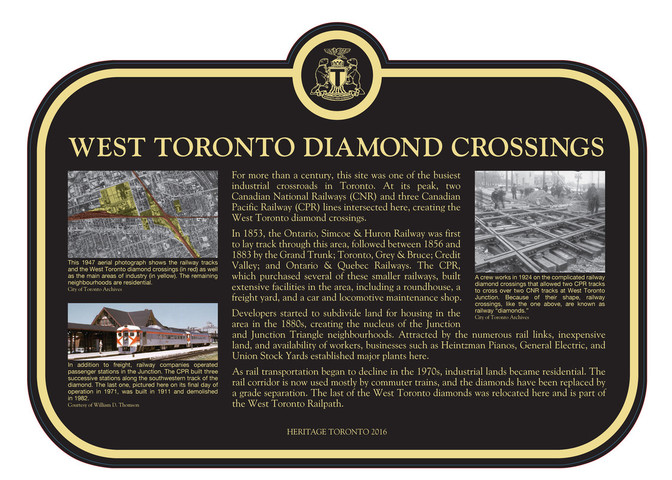 For more than a century, this site was one of the busiest industrial crossroads in Toronto. At its peak, two Canadian National Railways (CNR) and three Canadian Pacific Railway (CPR) lines intersected here, creating the West Toronto diamond crossings. In 1853, the Ontario, Simcoe & Huron Railway was first to lay track through this area, followed between 1856 and 1883 by the Grand Trunk; Toronto, Grey & Bruce; Credit
Valley; and Ontario & Quebec Railways. The CPR, which purchased several of these smaller railways, built extensive facilities in the area, including a roundhouse, a freight yard, and a car and locomotive maintenance shop. Developers started to subdivide land for housing in the area in the 1880s, creating the nucleus of the Junction and Junction Triangle neighbourhoods. Attracted by the numerous rail links, inexpensive land, and availability of workers, businesses such as Heintzman Pianos, General Electric, and
Union Stock Yards established major plants here. As rail transportation began to decline in the 1970s, industrial lands became residential. The rail corridor is now used mostly by commuter trains, and the diamonds have been replaced by a grade separation. The last of the West Toronto diamonds was relocated here and is part of the West Toronto Railpath.