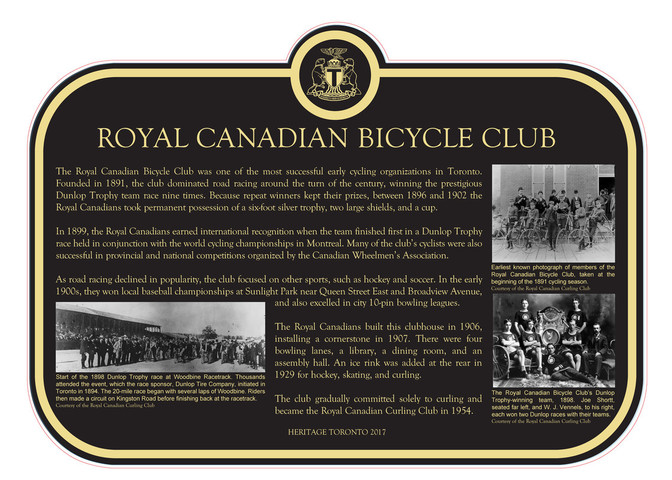 The Royal Canadian Bicycle Club was one of the most successful early cycling organizations in Toronto. Founded in 1891, the club dominated road racing around the turn of the century, winning the prestigious Dunlop Trophy team race nine times. Because repeat winners kept their prizes, between 1896 and 1902 the
Royal Canadians took permanent possession of a six-foot silver trophy, two large shields, and a cup.

In 1899, the Royal Canadians earned international recognition when the team finished first in a Dunlop Trophy race held in conjunction with the world cycling championships in Montreal. Many of the club’s cyclists were also successful in provincial and national competitions organized by the Canadian Wheelmen’s Association.

As road racing declined in popularity, the club focused on other sports, such as hockey and soccer. In the early 1900s, they won local baseball championships at Sunlight Park near Queen Street East and Broadview Avenue, and also excelled in city 10-pin bowling leagues.

The Royal Canadians built this clubhouse in 1906, installing a cornerstone in 1907. There were four bowling lanes, a library, a dining room, and an assembly hall. An ice rink was added at the rear in 1929 for hockey, skating, and curling.

The club gradually committed solely to curling and became the Royal Canadian Curling Club in 1954.