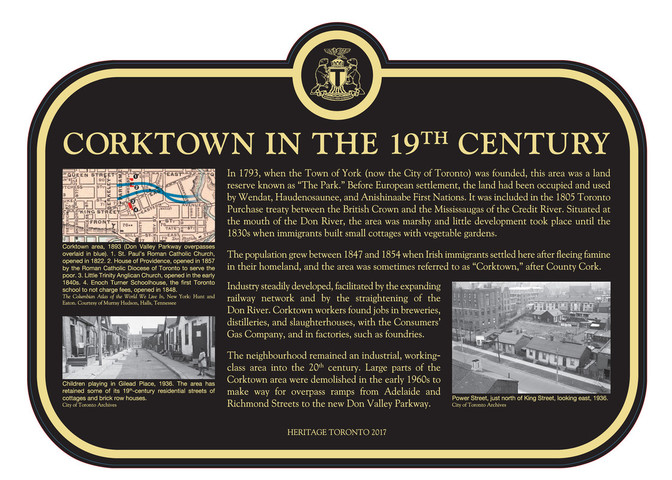 This land is the traditional territory of the Haudenosaunee, Anishinaabe, Wendat and Metis peoples. When the Towns and Villages, now the city of Toronto, was founded in 1793, this area was set aside as part of a land reserve known as 'The Park.' Because it was marshy, little development happened until the 1830s, when poor immigrants started to build small cottages with vegetable gardens.

The population grew between 1847 and 1854 when Irish migrants, fleeing famine in their homeland, settled here. The area became known, somewhat derogatorily as "Corktown."

Industry developed at the end of the 19th century with the arrival of the railway to the south and provided employment. Inhabitants of Corktown worked in breweries and distilleries, foundries, slaughterhouses and for the Consumer's Gas Company.

The neighbourhood was a working-class area into the 20th century and retains residential streets of workers' cottages and brick row houses. Large part of Corktown were demolished in the early 1960s to make way for the Don Valley Parkway.