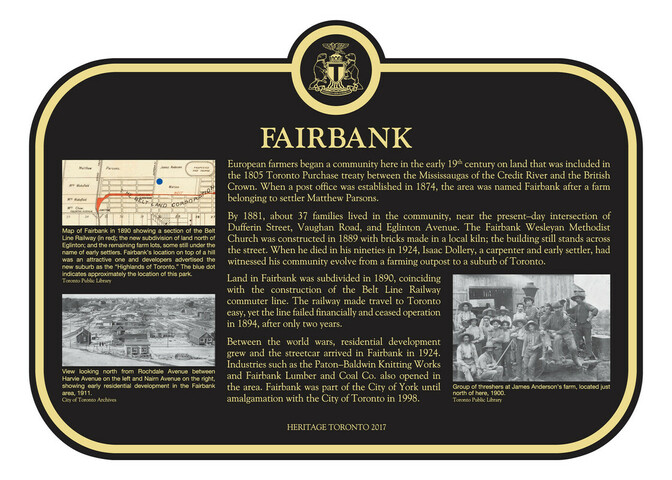 European farmers began a community here in the early 19th century on land that was included in the 1805 Toronto Purchase treaty between the Mississaugas of the Credit River and the British Crown. When a post office was established in 1874, the area was named Fairbank after a farm belonging to settler Matthew Parsons.

By 1881, about 37 families lived in the community, near the present–day intersection of Dufferin Street, Vaughan Road, and Eglinton Avenue. The Fairbank Wesleyan Methodist Church was constructed in 1889 with bricks made in a local kiln; the building still stands across the street. When he died in his nineties in 1924, Isaac Dollery, a carpenter and early settler, had witnessed his community evolve from a farming outpost to a suburb of Toronto.

Land in Fairbank was subdivided in 1890, coinciding with the construction of the Belt Line Railway commuter line. The railway made travel to Toronto easy, yet the line failed financially and ceased operation in 1894, after only two years.

Between the world wars, residential development grew and the streetcar arrived in Fairbank in 1924. Industries such as the Paton–Baldwin Knitting Works and Fairbank Lumber and Coal Co. also opened in the area. Fairbank was part of the City of York until amalgamation with the City of Toronto in 1998.