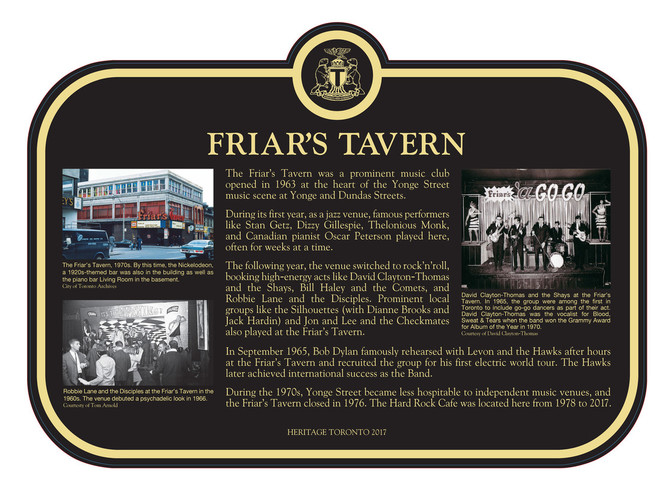 The Friar’s Tavern was a prominent music club opened in 1963 at the heart of the Yonge Street music scene at Yonge and Dundas Streets.

During its first year, as a jazz venue, famous performers like Stan Getz, Dizzy Gillespie, Thelonious Monk, and Canadian pianist Oscar Peterson played here, often for weeks at a time.

The following year, the venue switched to rock’n’roll, booking high-energy acts like David Clayton-Thomas and the Shays, Bill Haley and the Comets, and Robbie Lane and the Disciples. Prominent local groups like the Silhouettes (with Dianne Brooks and Jack Hardin) and Jon and Lee and the Checkmates also played at the Friar’s Tavern.

In September 1965, Bob Dylan famously rehearsed with Levon and the Hawks after hours at the Friar’s Tavern and recruited the group for his first electric world tour. The Hawks later achieved international success as the Band.

During the 1970s, Yonge Street became less hospitable to independent music venues, and the Friar’s Tavern closed in 1976. The Hard Rock Cafe was located here from 1978 to 2017.