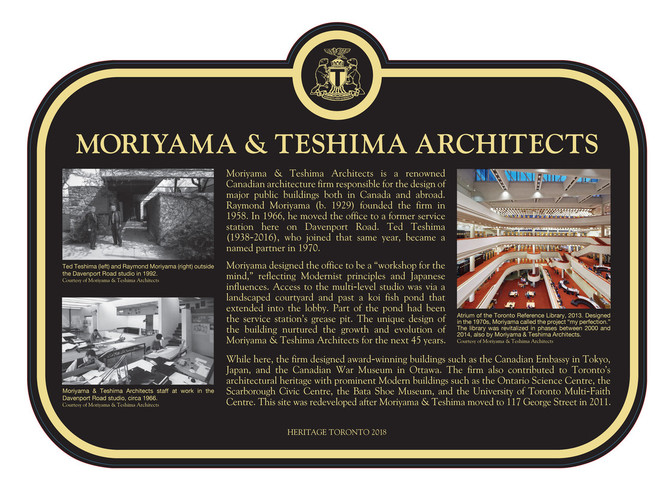 Moriyama & Teshima Architects is a renowned Canadian architecture firm responsible for the design of major public buildings both in Canada and abroad. Raymond Moriyama (b. 1929) founded the firm in 1958. In 1966 he moved the office to a former service station on this site. Ted Teshima (1938–2016), who joined the same year, became a named partner in 1970.

Moriyama designed the office to be a "workshop for the mind, " reflecting modernist principles and Japanese influence. Access to the multi-level studio was via a landscaped courtyard and past a koi fish pond, which extended into the lobby and part of which was originally the service station grease pit. The unique design of the building nurtured the growth and evolution of Moriyama & Teshima Architects for the next 45 years.

While here, the firm designed award-winning buildings such as the Embassy of Canada to Japan in Tokyo and the Canadian War Museum in Ottawa. The firm also contributed to Toronto’s architectural Heritage with prominent Modern buildings such as the Ontario Science Centre, the Scarborough Civic Centre, the Bata Shoe Museum, and the University of Toronto Multi-Faith Centre. This site was redeveloped after Moriyama & Teshima moved to 117 George Street in 2011.