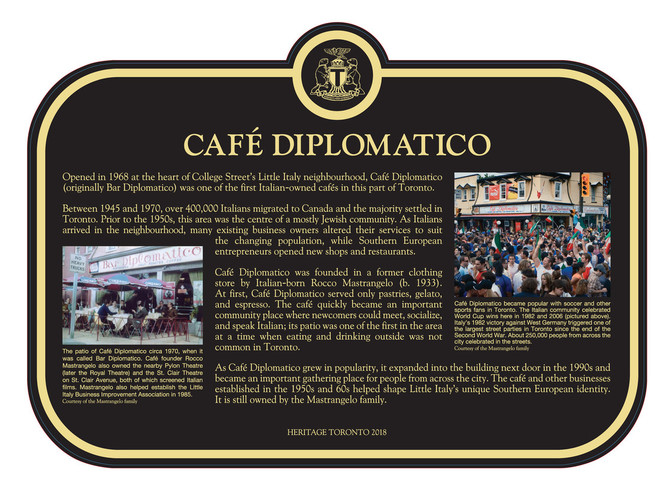 Opened in 1968 at the heart of College Street’s Little Italy neighbourhood, Café Diplomatico (originally Bar Diplomatico) was one of the first Italian-owned cafés in this part of Toronto.

Between 1945 and 1970, over 400, 000 Italians migrated to Canada and the majority settled in Toronto. Prior to the 1950s, this area was mostly Jewish. As Italians arrived in the neighbourhood, many existing business owners altered their services to suit the changing community, while Southern European entrepreneurs opened new shops and restaurants.

Café Diplomatico was founded in a former clothing store by Italian–born Rocco Mastrangelo (b. 1933). At first, Café Diplomatico served only pastries, gelato, and espresso. The café quickly became an important community place where newcomers could meet, socialize, and speak Italian; its patio was one of the first in the area at a time when eating and drinking outside was not widely popular in Toronto.

As Café Diplomatico grew in popularity, it expanded into the building next door in the 1990s and became an important gathering place for people from across the city. The café and other businesses established in the 1950s and 60s helped shape Little Italy’s unique Southern European identity. It is still owned by the Mastrangelo family.