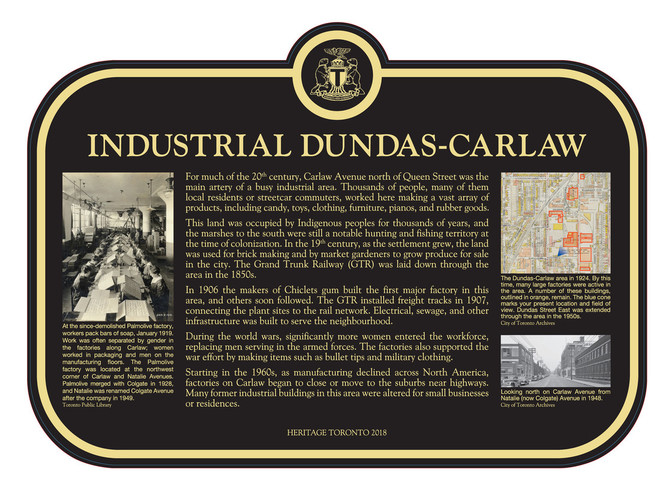 For much of the 20th century, Carlaw Avenue north of Queen Street was the main artery of a busy industrial area. Thousands of people, many of them local residents or streetcar commuters, worked here making a vast array of products, including candy, toys, clothing, furniture, pianos, and rubber goods.

This land was occupied by Indigenous peoples for thousands of years, and the marshes to the south were still a notable hunting and fishing territory at the time of colonization. By the 1850s, as the settlement grew, the land was used for brick making and by market gardeners to grow produce for sale in the city. The Grand Trunk Railway (GTR) was laid down through the area in the 1850s.

In 1906 the makers of Chiclets gum built the first major factory in this area, and others soon followed. The GTR installed freight tracks to the plants in 1907. Electrical, sewage, and other infrastructure was built to service the neighbourhood.

During the world wars, significantly more women entered the workforce, replacing men serving in the armed forces. The factories also supported the war effort by making items such as bullet tips and military clothing.

Starting in the 1960s, as manufacturing declined across North America, factories on Carlaw began to close or move to the suburbs near highways. Many former industrial buildings in this area were altered for small businesses or residences.