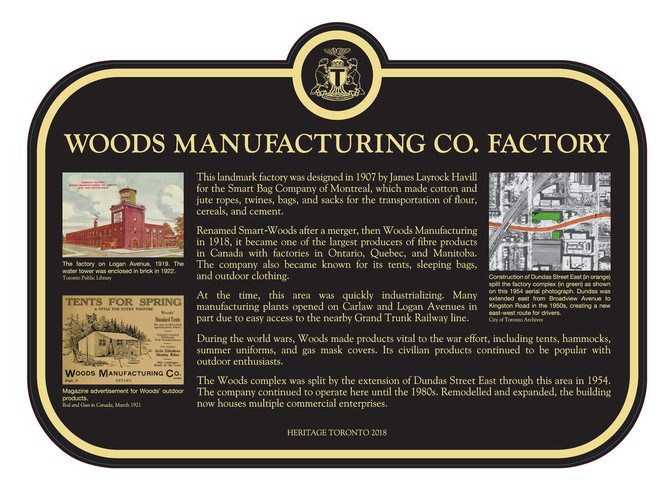 This landmark factory was designed in 1907 by James Layrock Havill for the Smart Bag Company of Montreal, which made cotton and jute ropes, twines, bags, and sacks for the transport of flour, cereals, and cement.

Renamed Smart-Woods after a merger, then Woods Manufacturing in 1918, it became one of the largest producers of fibre products in Canada with factories in Ontario, Quebec, and Manitoba. The company also became known for its tents, sleeping bags, and outdoor clothing.

At the time, this area was quickly industrializing. Many manufacturing plants opened on Carlaw and Logan Avenues in part due to easy access to the nearby Grand Trunk Railway line.

During the world wars, Woods made products vital to the war effort, including tents, hammocks, summer uniforms, and gas mask covers. Its civilian products continued to be popular with outdoor enthusiasts.

The Woods complex was split by the extension of Dundas Street East through this area in 1954. The company continued to operate here until the 1980s, and the building now houses multiple commercial enterprises.