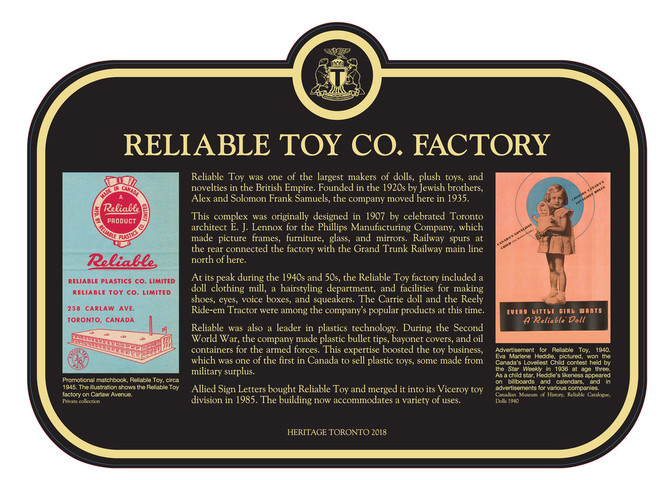 Reliable Toy was one of the largest makers of dolls, plush toys, and novelties in the British Empire. Founded in the 1920s by Jewish brothers, Alex and Solomon Frank Samuels, the company moved here in 1935.

This complex was designed in 1907 by celebrated architect E. J. Lennox for the Phillips Manufacturing Company, which made picture frames, furniture, glass, and mirrors. Railway spurs at the rear connected the factory with the Grand Trunk Railway main line north of here.

At its peak during the 1940s and 50s, the Reliable Toy factory included a doll clothing mill, a hairstyling department, and facilities for making shoes, eyes, voice boxes, and squeakers. The Carrie doll and the Reely Ride-em tractor were among the company’s popular products at this time.

Reliable was also a leader in plastics technology. During the Second World War, the company made plastic bullet tips, bayonet covers, and oil containers for the armed forces. This expertise boosted the toy business, which was one of the first in Canada to sell plastic toys, some made from military surplus.

Allied Sign Letters bought Reliable Toy and merged it into its Viceroy toy division in 1985. The building now accommodates a variety of uses.