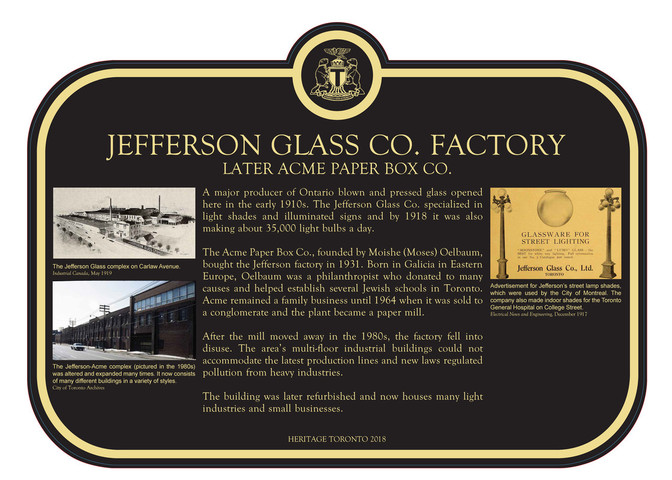 A major producer of Ontario blown and pressed glass opened here in the early 1910s. The Jefferson Glass Co. specialized in light shades and illuminated signs and by 1918 it was also making about 35, 000 light bulbs a day.

The Acme Paper Box Co., founded by Moishe (Moses) Oelbaum, bought the Jefferson factory in 1931. Born in Galicia in Eastern Europe, Oelbaum was a philanthropist who donated to many causes and helped establish several Jewish schools in Toronto. Acme remained a family business until 1964 when it was sold to a conglomerate and the plant became a paper mill.

After the mill moved away in the 1980s, the factory fell into disuse. The area’s multi-floor industrial buildings could not accommodate the latest production lines and new laws regulated pollution from heavy industries.

The building was later refurbished and now houses many light industries and small businesses.