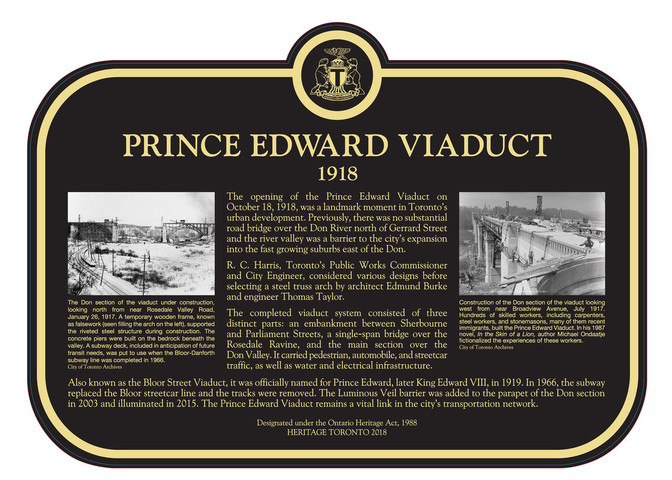 The opening of the Prince Edward Viaduct on October 18, 1918, was a landmark moment in Toronto’s urban development. Previously, there was no substantial road bridge over the Don River north of Gerrard Street and the river valley was a barrier to the city’s expansion into the fast growing suburbs east of the Don.

The completed viaduct system consisted of three distinct parts: an embankment between Sherbourne and Parliament Streets, a single-span bridge over the Rosedale Ravine, and the main section over the Don Valley. It carried pedestrian, automobile, and streetcar traffic, as well as water and electrical infrastructure.

Also known as the Bloor Street Viaduct, it was officially named for Prince Edward, later King Edward VIII, in 1919. In 1966, the subway replaced the Bloor streetcar line and the tracks were removed. The Luminous Veil barrier was added to the parapet of the Don section in 2003 and illuminated in 2015. The Prince Edward Viaduct remains a vital link in the city’s transportation network.