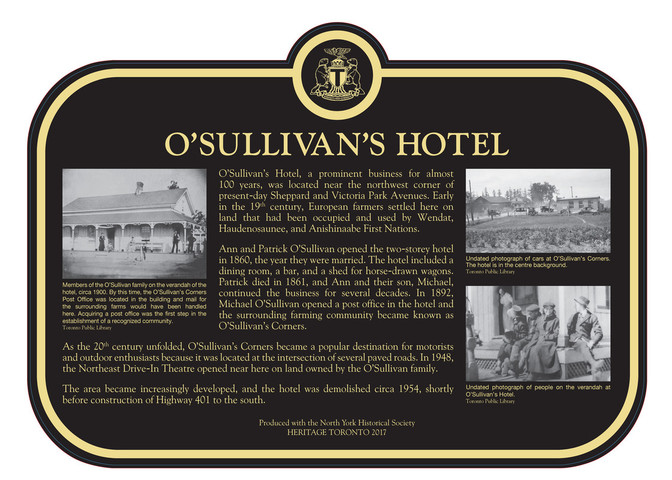 O’Sullivan’s Hotel, a prominent business for almost 100 years, was located near the northwest corner of present-day Sheppard and Victoria Park Avenues. Early in the 19th century, European farmers settled here on land that had been occupied and used by Wendat, Haudenosaunee, and Anishinaabe First Nations. Ann and Patrick O’Sullivan opened the two-storey hotel in 1860, the year they were married. The hotel included a dining room, a bar, and a shed for horse-drawn wagons. Patrick died in 1861, and Ann and their son, Michael, continued the business for several decades. In 1892, Michael O’Sullivan opened a post office in the hotel and the surrounding farming community became known as O’Sullivan’s Corners. As the 20th century unfolded, O’Sullivan’s Corners became a popular destination for motorists and outdoor enthusiasts because it was located at the intersection of several paved roads. In 1948, the Northeast Drive-In Theatre opened near here on land owned by the O’Sullivan family. The area became increasingly
developed, and the hotel was demolished circa 1954, shortly before construction of Highway 401 to the south.