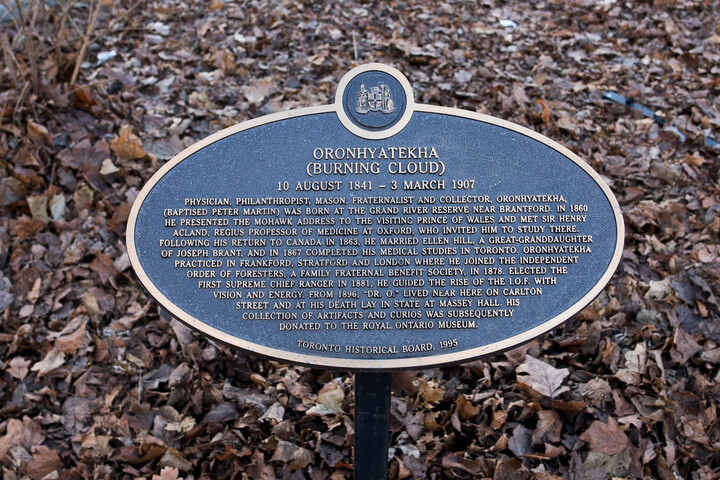 Physician, philanthropist, mason, fraternalist and collector, Oronhyatekha, (baptised Peter Martin) was born at the Grand River Reserve near Brantford. In 1860 he presented the Mohawk address to the visiting Prince Of Wales and met Sir Henry Acland, Regius Professor of Medicine at Oxford, who invited him to study there. Following his return to Canada in 1863, he married Ellen Hill, a great-granddaughter of Joseph Brant, and in 1867 completed his medical studies in Toronto. Oronhyatekha practised in Frankford, Stratford and London where he joined the Independent Order Of Foresters, a Family Fraternal Benefit Society, in 1878. Elected the first Supreme Chief Ranger in 1881, he guided the rise of the I.O.F. with vision and energy. From 1896, "Dr. O." lived near here on Carlton Street and at his death lay in state at Massey Hall. His collection of artifacts and curios was subsequently donated to the Royal Ontario Museum.