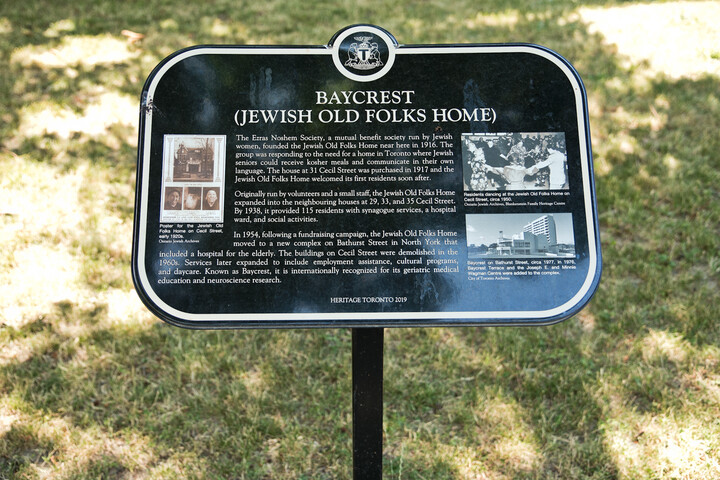 The Ezras Noshem Society, a mutual benefit society run by Jewish women, founded the Jewish Old Folks Home near here in 1916. The group was responding to the need for a home in Toronto where Jewish seniors could receive kosher meals and communicate in their own language. The house at 31 Cecil Street was purchased in 1917 and the Jewish Old Folks Home welcomed its first residents soon after.

Originally run by volunteers and a small staff, the Jewish Old Folks Home expanded into the neighbouring houses at 29, 33, and 35 Cecil Street. By 1938, it provided 115 residents with synagogue services, a hospital ward, and social activities.

In 1954, following a fundraising campaign, the Jewish Old Folks Home moved to a new complex on Bathurst Street in North York that included a hospital for the elderly. The buildings on Cecil Street were demolished in the 1960s. Services later expanded to include employment assistance, cultural programs, and daycare. Known as Baycrest, it is internationally recognized for its geriatric medical education and neuroscience research.