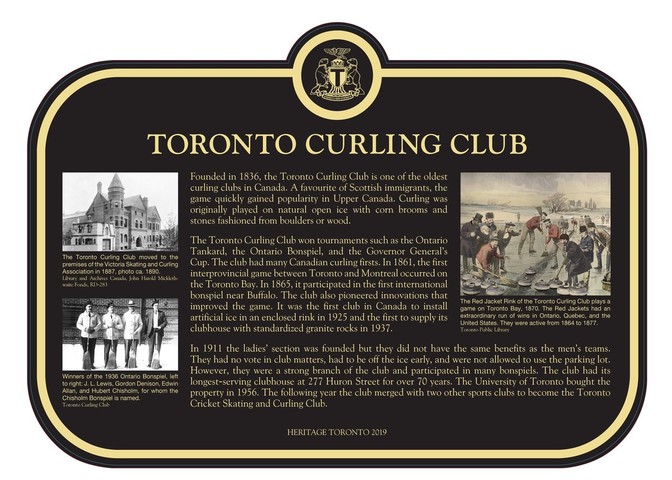 Founded in 1836, the Toronto Curling Club is one of the oldest curling clubs in Canada. A favourite of Scottish immigrants, the game quickly gained popularity in Upper Canada. Curling was originally played on natural open ice with corn brooms and stones fashioned from boulders or wood.

The Toronto Curling Club won tournaments such as the Ontario Tankard, the Ontario Bonspiel, and the Governor General’s Cup. The club had many Canadian curling firsts. In 1861, the first interprovincial game between Toronto and Montreal occurred on the Toronto Bay. In 1865, it participated in the first international bonspiel near Buffalo. The club also pioneered innovations that improved the game. It was the first club in Canada to install artificial ice in an enclosed rink in 1925 and the first to supply its clubhouse with standardized granite rocks in 1937.

In 1911 the ladies’ section was founded but they did not have the same benefits as the men’s teams. They had no vote in club matters, had to be off the ice early, and were not allowed to use the parking lot. However, they were a strong branch of the club and participated in many bonspiels. The club had its longest-serving clubhouse at 277 Huron Street for over 70 years. The University of Toronto bought the property in 1956. The following year the club merged with two other sports clubs to become the Toronto Cricket Skating and Curling Club.