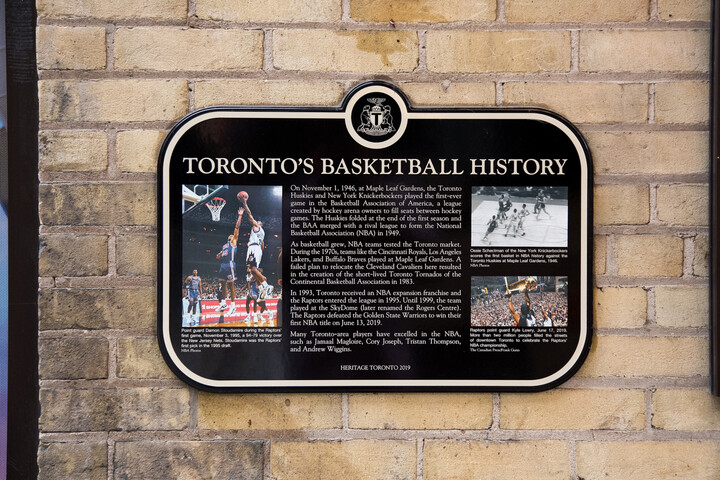 On November 1, 1946, at Maple Leaf Gardens, the Toronto Huskies and New York Knickerbockers played the first-ever game in the Basketball Association of America, a league created by hockey arena owners to fill seats between hockey games. The Huskies folded at the end of the first season and the BAA merged with a rival league to form the National Basketball Association (NBA) in 1949.

As basketball grew, NBA teams tested the Toronto market. During the 1970s, teams like the Cincinnati Royals, Los Angeles Lakers, and Buffalo Braves played at Maple Leaf Gardens. A failed plan to relocate the Cleveland Cavaliers here resulted in the creation of the short-lived Toronto Tornados of the Continental Basketball Association in 1983.

In 1993, Toronto received an NBA expansion franchise and the Raptors entered the league in 1995. Until 1999, the team played at the SkyDome (later renamed the Rogers Centre). The Raptors defeated the Golden State Warriors to win their first NBA title on June 13, 2019.

Many Toronto-area players have excelled in the NBA, such as Jamaal Magloire, Cory Joseph, Tristan Thompson, and Andrew Wiggins.