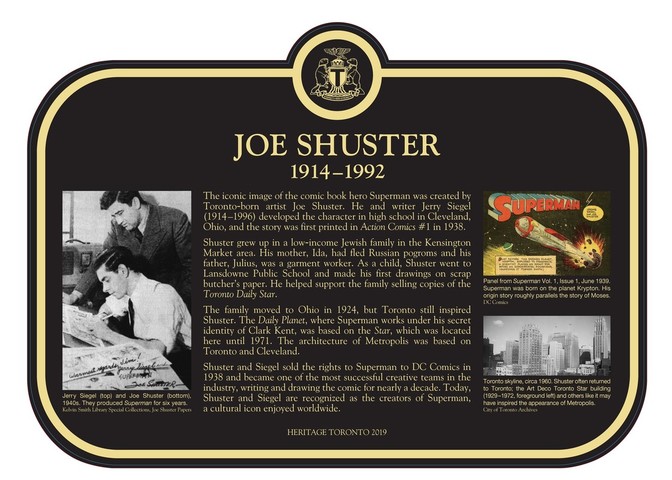 The iconic image of the comic book hero Superman was created by Toronto-born artist Joe Shuster. He and writer Jerry Siegel (1914–1996) developed the character in high school in Cleveland, Ohio, and the story was first printed in Action Comics #1 in 1938.

Shuster grew up in a low-income Jewish family in the Kensington Market area. His mother, Ida, had fled Russian pogroms and his father, Julius, was a garment worker. As a child, Shuster went to Lansdowne Public School and made his first drawings on scrap butcher’s paper. He helped support the family selling copies of the Toronto Daily Star.

The family moved to Ohio in 1924, but Toronto still inspired Shuster. The Daily Planet, where Superman works under his secret identity of Clark Kent, was based on the Star, which was located here until 1971. The architecture of Metropolis was based on Toronto and Cleveland.

Shuster and Siegel sold the rights to Superman to DC Comics in 1938 and became one of the most successful creative teams in the industry, writing and drawing the comic for nearly a decade. Today, Shuster and Siegel are recognized as the creators of Superman, a cultural icon enjoyed worldwide.