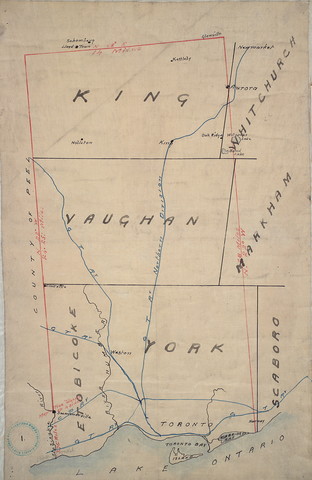 In 1787, the British Crown purchased land from the Mississaugas of The New Credit (represented by three chiefs) that comprises present day York Region and most of the City of Toronto. The price was £1,700 worth of trade goods such as blankets, kettles and gunpowder that the Mississaugas instead understood to be presents for their loyality during the American Revolution.

This map depicts the 250,808 acres of land (outlined in red) affected by the so-called Toronto Purchase. The British believing they had bought the land began to build a city, pushing the Mississaugas out. The Mississaugas believed they were allowing the British access to their land, while still retaining their traditional rights.