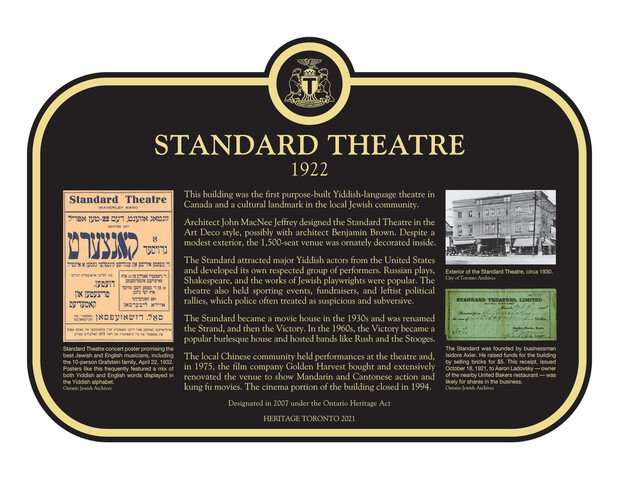 This building was the first purpose-built Yiddish-language theatre in Canada and a cultural landmark in the local Jewish community.

Architect John MacNee Jeffrey designed the Standard Theatre in the Art Deco style, possibly with architect Benjamin Brown. Despite a modest exterior, the 1,500-seat venue was ornately decorated inside.

The Standard attracted major Yiddish actors from the United States and developed its own respected group of performers. Russian plays, Shakespeare, and the works of Jewish playwrights were popular. The theatre also held sporting events, fundraisers, and leftist political rallies, which police often treated as suspicious and subversive.

The Standard became a movie house in the 1930s and was renamed the Strand, and then the Victory. In the 1960s, the Victory became a popular burlesque house and hosted bands like Rush and the Stooges.

The local Chinese community held performances at the theatre and, in 1975, the film company Golden Harvest bought and extensively renovated the venue to show Mandarin and Cantonese action and kung fu movies. The cinema portion of the building closed in 1994.