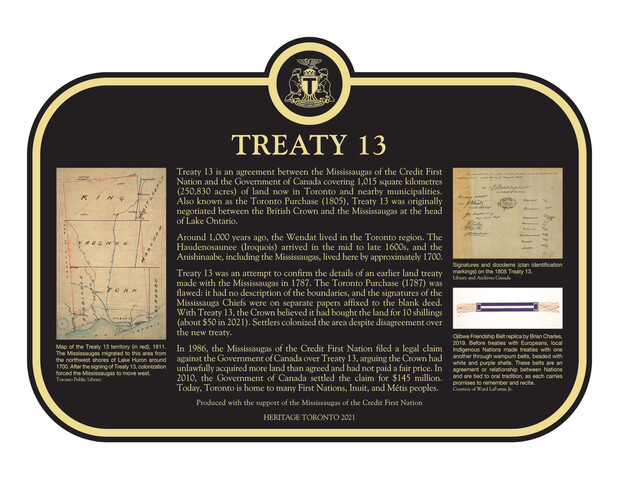 Treaty 13 is an agreement between the Mississaugas of the Credit First Nation and the Government of Canada covering 1,015 square kilometres (250,830 acres) of land now in Toronto and nearby municipalities. Also known as the Toronto Purchase (1805), Treaty 13 was originally negotiated between the British Crown and the Mississaugas at the head of Lake Ontario.

Around 1,000 years ago, the Wendat lived in the Toronto region. The Haudenosaunee (Iroquois) arrived in the mid to late 1600s, and the Anishinaabe, including the Mississaugas, lived here by approximately 1700.

Treaty 13 was an attempt to confirm the details of an earlier land treaty made with the Mississaugas in 1787. The Toronto Purchase (1787) was flawed: it had no description of the boundaries, and the signatures of the Mississauga Chiefs were on separate papers affixed to the blank deed. With Treaty 13, the Crown believed it had bought the land for 10 shillings (about $50 in 2021). Settlers colonized the area despite disagreement over the new treaty.