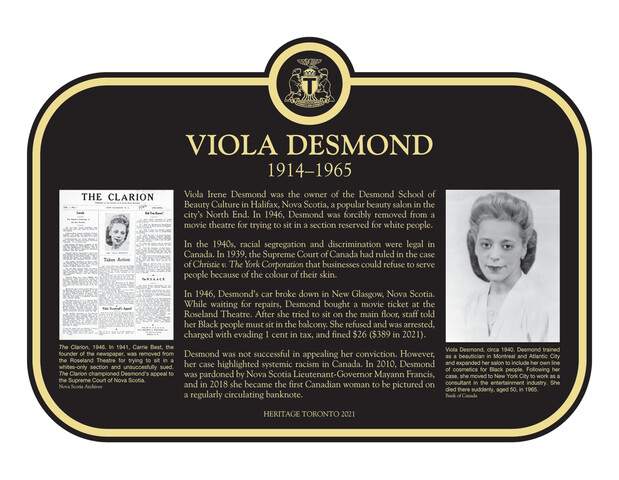 Viola Irene Desmond was the owner of the Desmond School of Beauty Culture in Halifax, Nova Scotia, a popular beauty salon in the city’s North End. In 1946, Desmond was forcibly removed from a movie theatre for trying to sit in a section reserved for white people.

In the 1940s, racial segregation and discrimination were legal in Canada. In 1939, the Supreme Court of Canada had ruled in the case of Christie v. The York Corporation that businesses could refuse to serve people because of the colour of their skin.

In 1946, Desmond’s car broke down in New Glasgow, Nova Scotia. While waiting for repairs, Desmond bought a movie ticket at the Roseland Theatre. After she tried to sit on the main floor, staff told her Black people must sit in the balcony. She refused and was arrested, charged with evading 1 cent in tax, and fined $26 ($389 in 2021).

Desmond was not successful in appealing her conviction. However, her case highlighted systemic racism in Canada. In 2010, Desmond was pardoned by Nova Scotia Lieutenant-Governor Mayann Francis, and in 2018 she became the first Canadian woman to be pictured on a regularly circulating banknote.