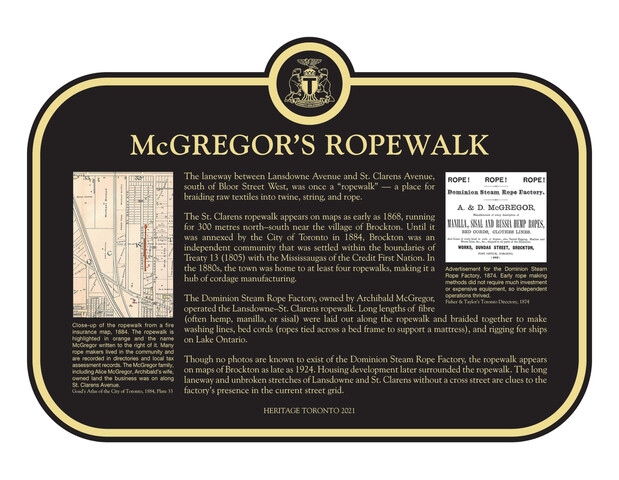 The laneway between Lansdowne Avenue and St. Clarens Avenue, south of Bloor Street West, was once a “ropewalk” — a place for braiding raw textiles into twine, string, and rope.

The St. Clarens ropewalk appears on maps as early as 1868, running for 300 metres north–south near the village of Brockton. Until it was annexed by the City of Toronto in 1884, Brockton was an independent community that was settled within the boundaries of Treaty 13 (1805) with the Mississaugas of the Credit First Nation. In the 1880s, the town was home to at least four ropewalks, making it a hub of cordage manufacturing.

The Dominion Steam Rope Factory, owned by Archibald McGregor, operated the Lansdowne–St. Clarens ropewalk. Long lengths of fibre (often hemp, manilla, or sisal) were laid out along the ropewalk and braided together to make washing lines, bed cords (ropes tied across a bed frame to support a mattress), and rigging for ships on Lake Ontario.

Though no photos are known to exist of the Dominion Steam Rope Factory, the ropewalk appears on maps of Brockton as late as 1924. Housing development later surrounded the ropewalk. The long laneway and unbroken stretches of Lansdowne and St. Clarens without a cross street are clues to the factory’s presence in the current street grid.