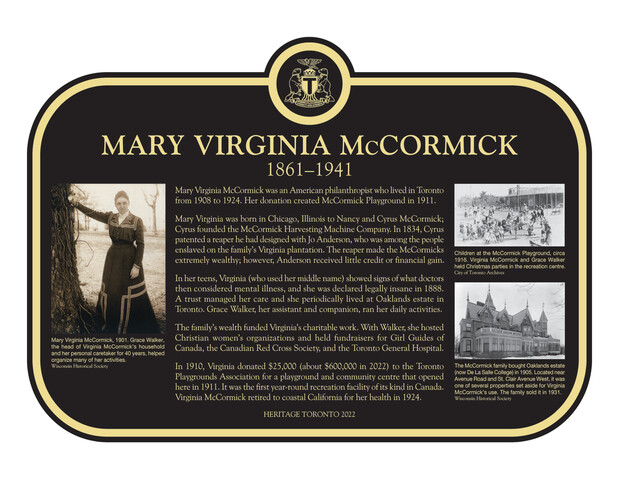 Mary Virginia McCormick was an American philanthropist who lived in Toronto from 1908 to 1924. Her donation created McCormick Playground in 1911.

Mary Virginia was born in Chicago, Illinois to Nancy and Cyrus McCormick; Cyrus founded the McCormick Harvesting Machine Company. In 1834, Cyrus patented a reaper he had designed with Jo Anderson, who was among the people enslaved on the family’s Virginia plantation. The reaper made the McCormicks extremely wealthy; however, Anderson received little credit or financial gain.

In her teens, Virginia (who used her middle name) showed signs of what doctors then considered mental illness, and she was declared legally insane in 1888. A trust managed her care and she periodically lived at Oaklands estate in Toronto. Grace Walker, her assistant and companion, ran her daily activities.

In 1910, Virginia donated $25,000 (about $600,000 in 2022) to the Toronto Playgrounds Association for a playground and community centre that opened here in 1911. It was the first year-round recreation facility of its kind in Canada. Virginia McCormick retired to coastal California for her health in 1924.