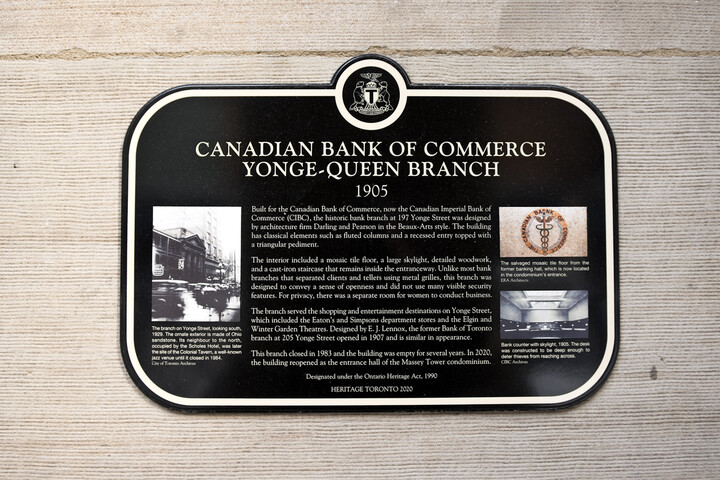 Built for the Canadian Bank of Commerce, now the Canadian Imperial Bank of Commerce (CIBC), the historic bank branch at 197 Yonge Street was designed by architecture firm Darling and Pearson in the Beaux-Arts style. The building has classical elements such as fluted columns and a recessed entry topped with a triangular pediment. The interior included a mosaic tile floor, a large skylight, detailed woodwork, and a cast-iron staircase that remains inside the entranceway. Unlike most bank branches that separated clients and tellers using metal grilles, this branch was designed to convey a sense of openness and did not use many visible security features. For privacy, there was a separate room for women to conduct business. The branch served the shopping and entertainment destinations on Yonge Street, which included the Eaton’s and Simpsons department stores and the Elgin and Winter Garden Theatres. Designed by E. J. Lennox, the former Bank of Toronto branch at 205 Yonge Street opened in 1907 and is similar in appearance. This branch closed in 1983 and the building was empty for several years. In 2020, the building reopened as the entrance hall of the Massey Tower condominium. Designated under the Ontario Heritage Act, 1990.